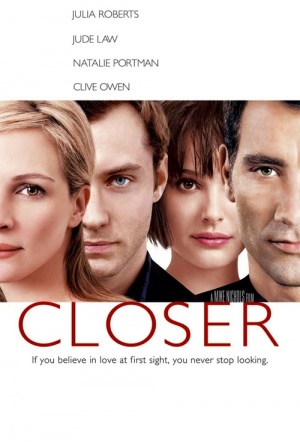 Jude Law, Julia Roberts, Clive Owen and Natalie Portman star in this relationship drama about two romances that threaten to collapse when a man from one couple beings an affair with a woman from the other. Directed by Oscar-winner Mike Nichols (The Graduate), Owen and Portman won Best Supporting Actor and Actress at the 2005 Golden Globes. Based on the play by Patrick Marber.

Dan (Law) is an intelligent but feeble journalist, torn between his loving relationship to his clingy girlfriend Alice (Portman) and the woman he is having an affair with, the emotionally damp photographer Anna (Roberts). Anna is conflicted over her fling with Dan and the doctor she’s currently with, Larry (Owen).