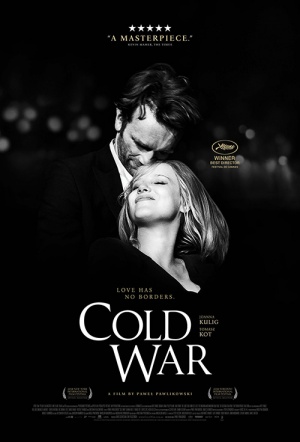 A passionate romance between two mismatched people, set in 1950s Cold War Poland. Multi-award winner at festivals around the world, including Best Director at Cannes 2018.

"Based loosely on the story of the director's own parents, Cold War covers the entirety of a couple's love affair, from their enchanted first meeting in 1949 to the aching denouement of their relationship in the 1960s. Wiktor (Tomasz Kot) is a jazz-loving pianist and musical director tasked with auditioning traditional folk musicians as part of a state-sponsored project to champion culture from rural Poland. Young Zula (Joanna Kulig), who turns out to be more torch singer than folk singer, captivates Wiktor at first sight with her beauty and insouciance. Their fates joined, Zula and Wiktor are soon struggling both with personal demons and historical forces that persist in tearing them apart." (Toronto International Film Festival)

A passionate romance between two musicians commencing in post-WWII Poland was a standout of 2018 for Steve Newall, who praises the incredibly photogenic and supremely talented leads, and musical numbers and romance that sizzle the screen.

It's visually stunning, passionate, wistful, and thoughtful in equal measure.

A soberly moving study of the disappointment and insecurity that can blossom from supposed renewal: It's a romance in which new beginnings and endings can be hard to tell apart.

It deftly walks the line between appropriately somber and great, sophisticated fun.

There is an exquisite chill to this film.

Cold War is an evocation of love, music, passion and heartbreak set against ice, rubble and fear. It is a lean and perfect gem.

This is an achingly personal story - the romantic leads are named after Pawlikowski's own parents, to whom the film is dedicated - and also a sadly resigned one.

A thrilling exploration of romantic disappointment with a killer soundtrack.

Cold War will only increase Pawlikowski's reputation as one of the next great auteurs, but, more importantly, it will have everyone who sees it asking, "What's that girl's name?" Ladies and gentlemen, her name is Joanna Kulig has she has arrived.