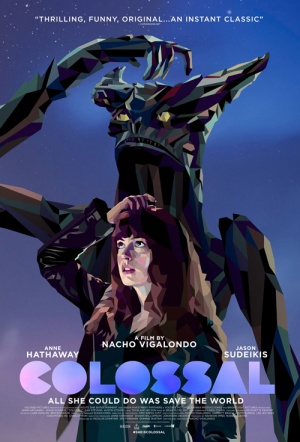 Gloria (Hathaway) is an out-of-work girl who, after getting kicked out of her apartment by her boyfriend, is forced to leave her life in New York and move back to her hometown. When news reports surface that a giant creature is destroying Seoul, South Korea, Gloria gradually comes to the realisation that she is somehow connected to this far-off phenomenon. As events begin to spin out of control, Gloria must determine why her seemingly insignificant existence has such a colossal effect on the fate of the world.

Weaving together unlikely subject matter, the Anne Hathaway and Jason Sudeikis-led Colossal is perhaps the most audacious effort yet from writer/director Nacho Vigalondo - which says something off the back of time travel, alien, and online voyeurism pics. Principally, it’s a film about Gloria (Hathaway), a woman returning to her small American hometown and confronting her unhealthy relationships with men and booze. And then, half a world away, there’s also an enormous monster terrorising Seoul - somehow linked to Gloria and her actions.

Engaging ideas bubble up every so often in Colossal, a film that carries out magical thinking to its extreme. But the audacity of its conceit is inexorably tamed, becoming an all-too-familiar lesson on saying no.

Seems made for satirical treatment yet is executed with an increasingly awkward semi-seriousness the characters aren’t depthed (or likable) enough to ballast.

For better and worse, you won't have seen a movie like Colossal before, and you won't again. And that, in itself, is a strong recommendation.

"Colossal" ... wrings a great deal of fun - and also some genuine terror, by no means all of it monster-related - from its blithely bizarre conceit.

Given the bizarro conceit, there’s something surprisingly, and frustratingly, safe about the film.

In my notebook I've scrawled "this would make a great Spike Jonze short film". Which sounds about right.

An odd film that may feel disorienting to some, but it's also a totally original conceit that dares to tackle a little thing in a gigantic way.

The cast's likability keeps us on board, watching the sometimes baffling behavior onscreen...

This is what would happen if Pacific Rim and When Harry Met Sally had a baby, and it’s freaking awesome.