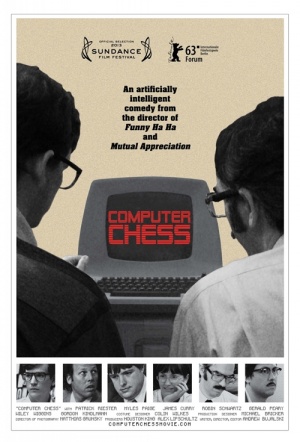 Set in the early 1980s and shot in black and white, a group of computer software geniuses attempt to create a program that can beat a human chess player. While there's not quite an artificial intelligence on display to rival 2001:A Space Odyssey's HAL 9000, there's still plenty at stake in this weekend tournament pitting Man against Machine. The fourth feature from the so-called 'Godfather of Mumblecore', director Andrew Bujalski (Funny Ha Ha, Mutual Appreciation).

"As the nerdy guys sweat through various social situations (especially with the one girl there), and the convention overlaps with a group of new-age couples in therapy, things get really strange. Writer/director Andrew Bujalski has created a playful, emotionally resonant period piece bolstered by keen aesthetics, which launches us back into the awkward and uncertain time when the hopeful wave of the ’60s and ’70s was about to crest into the Reagan ’80s. As high-definition video tries to replicate film while threatening to lose all of its original nuances, Bujalski brings the beauty and contrast of early PortaPak video techniques back from the landfill." (Sundance 2013)