Few filmmakers have the ability to draw the same kind of star power as Steven Soderbergh, and his latest film Contagion is no exception. In fact, it might be his most star-studded film to date, with a mixture of huge lead names and excellent character actors all coming together in a film that, unfortunately but perhaps unsurprisingly, bites off a little more than it can chew. That's not to say Contagion isn't good; it's arguably the most frightening film of the year, and the massive cast largely turn in solid performances, but the relatively brief running time (106 minutes) sees some of the story threads left underdeveloped, while some could arguably have been jettisoned altogether.

Contagion documents the spread of a mystery disease outbreak named MEV-1, and how people, fed by the media, deal with the epidemic, and it's in this aspect that the film shines. It's familiar cinematic ground that has had some mixed results in the past, with movies like The Andromeda Strain and Outbreak being decent examples, but Soderbergh presents the subject matter in a much more realistic way. Not known for being overly flashy in his direction, Soderbergh takes a much more objective stance, simply letting events unfold in a credible fashion, and the level of research he must have done is clear to see in the procedural, bureaucratic handling from the Center for Disease Control (CDC) and various other governmental agencies. There is some subtle visual flair however, with the majority of the film shot in sickly green and yellow tones, and lingering shots on door handles, hand rails and the like, driving home the concept of our lack of awareness concerning the spread of disease, and how easily a virus like MEV-1 could get out of control in the real world. There are plot holes, but for the most part the scenario is a believable and terrifying one.

Where Contagion is less successful however is in its treatment of the viral nature of modern media, and how the internet and social media have changed the spread of information across the globe. There are brief mentions of phenomena such as Twitter, Facebook and YouTube, but the idea that the internet is feeding the developing panic isn't quite fleshed out enough. The biggest problem comes down to Jude Law's character, blogger Alan Krumwiede. It's an interesting idea to place a freelance, whistle-blowing character at the centre of the panic surrounding MEV-1, but given that Soderbergh is juggling several other story threads simultaneously, Krumwiede's presence simply doesn't have the impact he should. Soderbergh clearly wants to critique this concept of unaccountable journalism and fearmongering within the blogosphere, but Law's over-the-top, mustache twirling performance doesn't fit the film's tone, and the issues surrounding Krumwiede and his alleged homeopathic 'cure', while again potentially interesting, aren't pursued enough to be compelling. Soderbergh tries to show as many aspects of the crisis as he can, yet had he excised one of the less vital stories (perhaps those concerning Marion Cotillard or Elliott Gould), the pervasiveness of the internet in the media could have been explored in much more depth, using the disease as an effective macguffin to examine media-fuelled panic in society.

A new Steven Soderbergh film is always worthy of discussion, especially given that, if we are to believe the director himself, we're unlikely to see too many more of them. Contagion is a textbook example of the adage that 'less is more', and while it presents a realistically unsettling story, ultimately the film tries to do to much and loses some impact as a result. You will possibly walk out of the cinema more mindful of the unseen dangers that are all around, but because of its mis-steps, Contagion isn't as frightening, or simply as good as it feels like it should be. 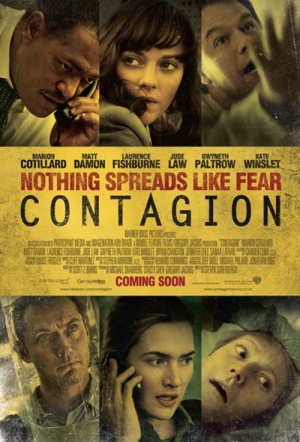