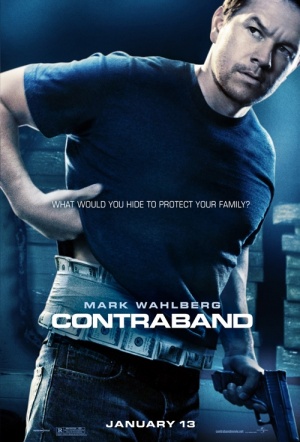 In New Orleans, former smuggler Chris (Wahlberg) is forced back into the game after his brother-in-law, Andy (Caleb Landry Jones, X-Men: First Class), botches a drug deal for his ruthless boss, Briggs (Ribisi). In an attempt to repay Andy's debt, Chris assembles a crew and makes a run to Panama and back, hoping to return with millions in counterfeit bills. When things fall apart on route, Briggs seeks revenge by going after Chris' wife (Beckinsale). Finding himself deep inside the world he had left behind, Chris now has to go toe-to-toe with the psychotic Briggs to protect his family.

Has a few moments of tension, but it adheres to a predictable heist formula hardly worth trafficking in.

Wahlberg could sleepwalk through this role, and does.

Contraband involves a lot of energy, but I'm getting tired of violent retreads of these heist elements.

Contraband is an action-junkies playground.

Contraband left a bad taste in my mouth.

While often grungy and far-fetched, does keep you watching.

Makes for a fun flick at first, until a nasty - and tonally inconsistent - misogynistic streak kills the joy.

It’s pretty much exactly as good as it needs to be.