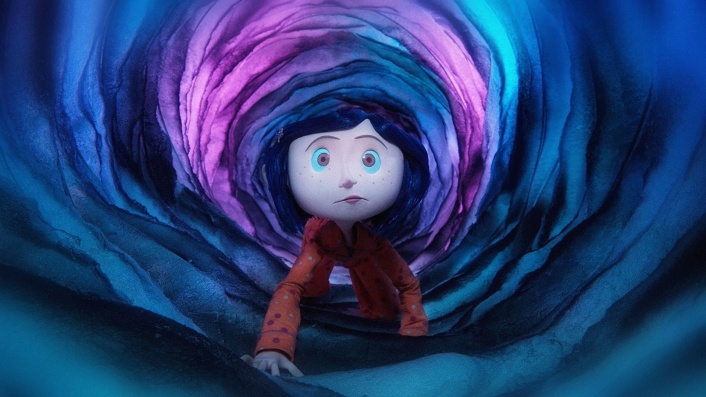 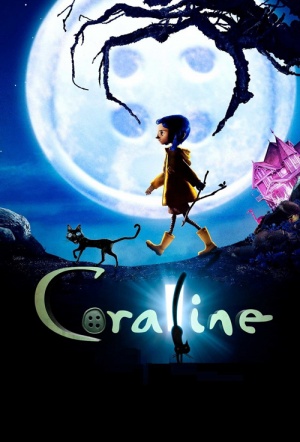 Coraline is based on Neil Gaiman’s international best-selling book and is helmed by stop-frame animation freak Henry Selick (The Nightmare Before Christmas).

A young girl (voiced by Dakota Fanning) walks through a secret door in her new home and discovers an alternate version of her life. On the surface, this parallel reality is eerily similar to her real life - only way better. But when this wondrously off-kilter adventure turns dangerous, and her counterfeit other mother (voiced by Teri Hatcher) tries to keep her forever, Coraline must count on her stubborn determination and the aid of her talking black cat to get back home.

Rich, ingenious and frighteningly close to home, Selick’s new nightmare puts him nearer to Guillermo del Toro and David Lynch than Tim Burton. See it in 3D. Then sleep with the light on.

Coraline lingers in an atmosphere that is creepy, wonderfully strange and full of feeling.

This is a gloomy film with weird characters doing nasty things. I've heard of eating chocolate-covered insects, but not when they're alive.

Story waffles but spellbinding animation. Not one for the littlies.

A remarkable feat of imagination, a magical tale with a genuinely sinister edge.

This is a marvelous family story, tapping into all sorts of childhood dreams and nightmares involving Mommy, monsters and heroic youngsters. Selick's imaginative sets and puppets are in perfect pitch with Gaiman's fantasy.

Terrifying and beautiful, believable and fantastical, this is one of the best children's films in years and Selick's finest -- better even than "The Nightmare Before Christmas."