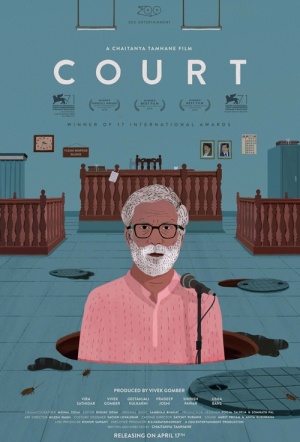 A winner at Venice Film Festival (amongst others), this absurdist Indian courtroom drama portrays the country’s contemporary justice system and caste prejudice. Features a cast of professional and non-professional actors.

An elderly folk singer and grassroots organiser, dubbed the “people’s poet,” is arrested on a trumped-up charge of inciting a sewage worker to commit suicide. His trial is a ridiculous and harrowing display of institutional incompetence, with endless procedural delays, coached witnesses for the prosecution, and obsessive privileging of arcane colonial law over reason and mercy.

There are courtroom dramas, and then there's Court, Chaitanya Tamhane's impressive debut, which flays alive India's justice system while commenting on class, education and access to power.

The film conjures an absurdist nightmare of bureaucratic incompetence, indifference and social inequity.

Chaitanya Tamhane emerges as one of the world's most accomplished and promising film-makers under 30 with his quietly steely legal drama Court, a bluntly-titled chronicle of politically-motivated injustice.