So snakes on a plane you say, so Sharks in a Tornado you say, hmmm alligators in your house per se....well let's just say I had smugly cast my aspersions as to what type of movie this might be before well before arriving, especially as I had not seen or heard anything about the movie like you normally do before release date. Enter tickets in hand two cynical adults, wary of what might unfold...possibly at best a school night out with a few laughs at a far fetched story plot .

Opening scenes rolled in and already had me laughing at the subtle and ironic wit thrown in from the name of the swim team to the Jaws car mirror ornament without pushing the limits of corniness the likes of the Producer's previous cult classic movie Evil Dead. Refreshingly it also featured lead characters who have not been over exposed, but were happily familiar faces.

Things I have learnt from these type of movies is - Dumb people do what dumb people do and get eaten, quite simple! In fact you might be safer in this situation with more dumb people around. Logic says don't enter flood waters with known gators around, and know your predator - fact these things can leap 3/4 of their body length out of water so do not linger over hatches. And Never, I repeat NEVER try to save the beloved family pet or get distracted by your cell phone.

There comes a point in many a movie when the CGI or death defying feats become unbelievable and the plot can push the boundaries too far...but the adrenaline rush which had me at times pushed back in my seat with anticipation, gave reprieve to breathe and seriously only added to the charm and bought back that feeling of old school JAWS epicness.

The usual cold air pumped into the cinema we complain about most nights spent at the movies, now became the extra dimension experience - complimenting and contributing to the feeling like you were actually in the dank, dark crawl space whose title now made sense. The close up angles and under water swim shoots took you on a roller coaster ride at every point in the journey.

And final mental note damn I need to invest in some better shower doors, as my old doors fall off at the drop of a hat and might save your life one day as many death scenes occur in showers.

I don't recall leaving a movie for quite some time where we drove home for 15 minutes excitedly comparing notes on a movie which pleasantly surprised and and had us giggling a little bit like teenagers reliving moments of a film we felt a tad embarrassed to have enjoyed. 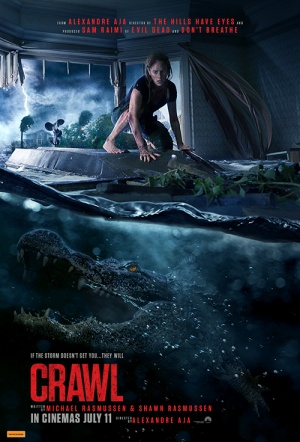