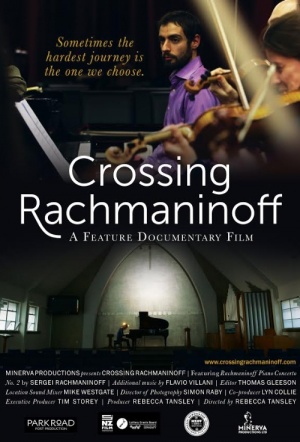 "Beginning in Auckland, where Villani arrived at the age of 26 to study performance at Auckland University, the film starts four months before the big night, but incorporates a good measure of his backstory into its countdown to show time. We see him with his own students. We see him rehearsing, performing and taking notes from his mentor, Matteo Napoli. Then it’s time to return to Italy a mere ten days ahead of the performance.

"You may never want to spend another Christmas in the sun once you’ve hung out for a winter evening in the cucina Villani, though there’s something of the prodigal son about this food-filled homecoming. Villani explains the terrible rift with his father, an ex-military man unable to accept that his son is gay or that he could ever make a living playing the piano." (New Zealand International Film Festival)

Merging slice-of-life biopic with concert film, Crossing Rachmaninoff is – in some ways – a real-life version of Whiplash with a pianist. The film adamantly emphasises the unavoidable perfectionism required to play on stage while highlighting the struggles its subject Flavio Villani faced because of his musical desires (and sexual orientation). But don’t go in expecting blood-on-the-keys intensity or an angry, bald tutor with a face-slapping complex.

An intriguing, interesting and intimate portrait of a blossoming artist.

A touching and engrossing portrait of the artist.