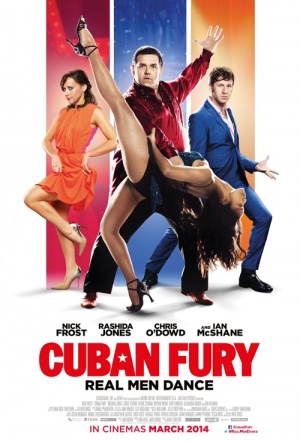 Nick Frost (Shaun of the Dead, The World's End) stars as Bruce, a chubby Londoner who was once hailed as a teen salsa dancing prodigy until a bullying incident cut his career short. 22 years later, the arrival of a new boss (Parks & Recreation's Rashida Jones) encourages Bruce back on to the dancefloor.

There’s a type of lazy high concept comedy that thrives on casting people in unexpected roles. Hey, it’s Will Ferrell as a basketballer/ice skater/soccer coach! Kevin James is a MMA fighter/zookeeper/comedian that audiences are somehow supposed to find funny!

An amiable tale of courage and redemption.

A great big bear-hug of a Britcom, with rhinestones on its shirt, salsa in its heart and dick jokes up its sleeve.

[An] amiable but flat-footed debut feature.

This comedy never quite relaxes or convinces or comes together.

Busts a few minor moves, but not as light on its feet as it wants to be.

Frost’s solo movie lacks the inventive madness of his Cornetto team-ups, but it’s still a heartfelt blast of fun.