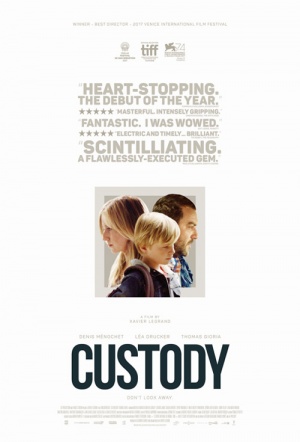 Xavier Legrand’s acclaimed directorial debut is a drama charting a family’s struggles with the fallout of divorce. Stars Léa Drucker and Denis Ménochet.

"Miriam (Drucker, The Blue Room) and Antoine (Ménochet, The Returned) have recently separated. While she’s willing to permit their 17-year-old daughter Joséphine (Mathilde Auneveux) to decide living arrangements for herself, Miriam is desperate to keep her youngest, 12-year-old Julien (Thomas Gioria), away from his father. But the magistrate rules in favour of joint custody, and suddenly the boy is thrown directly into the middle of an escalating parental conflict, where it seems inevitable that sides must be chosen." (Alliance Française)

Legrand operates in the raw social realist tradition of such auteurs as Maurice Pialat and the Dardenne brothers, stripping away sentimentality in favour of direct, observational filmmaking.

A father-son drama for anyone who finds There Will Be Blood too cosy in its depiction of paternal love.

There is not much storytelling light and shade in Custody: but it has the shock and swipe of real life.

An almost unbearably-tense, no-holds-barred drive through the nightmare of domestic terrorism, Custody is a can't-look-away hybrid of gruelling reality and heightened cinematic technique.

"Custody" can be difficult, even wrenching to watch, but it always plays fair with the audience, and the experience, worth every minute expended, is impossible to forget.

Dispensing with a score and using ambient sound to ratchet up the tension, this is an object lesson in stylistic restraint that only misses its step during the nerve-shredding denouement.