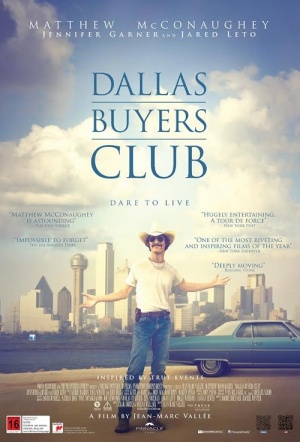 True story drama with Matthew McConaughey (in a Golden Globe and Oscar-winning performance) as a womanising, redneck Texan staring down a 30-day death sentence when he is diagnosed HIV-positive. Not finding help through traditional means, he hustles his way around doctors and police in acquiring non-approved drug treatment.

Ron Woodroof 's free-wheeling life was overturned in 1985 with his terminal diagnosis. Learning of medicines lacking government approval, Woodroof took matters into his own hands, tracking down alternative treatments from all over the world by means both legal and illegal. Bypassing the establishment, he joined forces with an unlikely band of renegades and outcasts - brought to life by a supporting cast including Jared Leto, also a Golden Globe and Oscar-winner for his role - and established a hugely successful "buyers' club" to sidestep the law.

Leto and McConaughey, who reportedly lost over 17 kilograms for the role, are joined by a cast that includes Jennifer Garner, Steve Zahn and Deerhunter frontman Bradford Cox in his film debut.

Director Jean-Marc Valle doesn’t shy away from the visceral nature of the victims’ lifestyles or the disease, showing via woozy handheld photography their sex and drug lifestyle and declining health. Given the lack of over-sentimentality, perhaps we shouldn’t be surprised that it’s not the most emotionally engaging film. But Dallas Buyers Club is worth seeing for the impressive performances alone.

McConaughey and Leto give terrific performances in this riveting and surprisingly relatable true story.

If not wholly convincing as an 'issues' movie, this memoir is a triumph as an actors' showcase; with McConaughey and Leto giving the performances of their careers.

An affecting if conventional real-life story of medical activism... McConaughey brings a jolt of unpredictable energy.

McConaughey delivers a twitchy, hostile performance on par with anything he's done since he escaped the rom com cul-de-sac.

It's a formulaic story that takes full advantage of these broad, familiar formulas to win viewers, but finds enough unique detail to retain its own identity.

Entertaining account of a rodeo redneck who becomes an unlikely angel in the AIDS struggle.

McConaughey is currently the most exciting acting talent at work in movies.