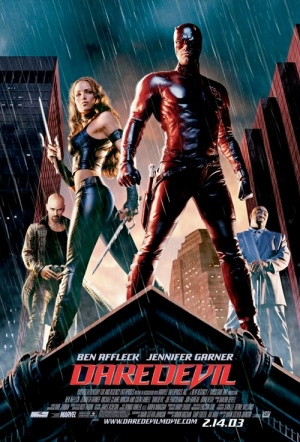 Fate deals young orphan Matt Murdock a strange hand when he is doused with hazardous waste. The accident leaves Matt blind but also gives him a heightened 'radar sense' that allows him to 'see' better than you'd think. Years later Murdock has grown up and become a respected criminal attorney. But after he's done his with the day job, Matt takes on a secret identity as 'The Man Without Fear', Daredevil, the masked avenger that patrols the neighborhood of Hell's Kitchen and New York City to combat the injustice that he can't beat in the courtroom.

This franchise-hungry champion of the underdog brings no sense of fun to his pursuit of bad guys; it's just the fate he's stuck with.

A grown-up comic adap custom-made to keep the fans happy, though rabid action-hounds may be left sniffing for more. Oh, and here's a tip: don't walk out as soon as the credits roll...

The movie is, in short, your money's worth, better than we expect, more fun than we deserve.

Unfortunately, Garner doesn't have as much screen time as her prominence in the advertising would indicate: Daredevil has a hard time staying alive when she's not on the scene.