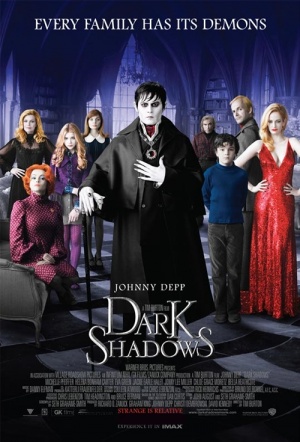 In the 16th Century, the English-born Barnabas Collins (Depp) is living a wealthy and powerful life as an American playboy in the town of Collinsport, Maine. But after breaking the heart of a secretive witch, Barnabas is turned into a vampire and buried alive for 200 years. Upon his release in the year 1972, he finds his once-thriving establishment to be in tatters, with his descendants equally as broken.

"Wood" is still by far Depp and Burton's best collaboration, exhibiting the balance of tone between kitsch parody and zealous fantasy that's missing in Dark Shadows, less a resurrection than a clumsy desecration.

This bizarre but weirdly bloodless retro-camp exercise is neither funny nor eerie enough to seduce the uninitiated, and will court bemused reactions at best from the series' still-estimable fan following.

Burton, as usual, is great on atmosphere and comic timing (these are his weirdest moments since Ed Wood), but less so at reining in an overcomplicated plot and dimly lit action scenes.

Dark Shadows sinks its teeth half-way into its potentially meaty material but hesitates to go all the way.

Dark Shadows sinks its teeth half-way into its potentially meaty material but hesitates to go all the way.

A step up from Alice In Wonderland and Charlie And The Chocolate Factory, but not tip-top Tim.

There’s nothing particularly infuriating about the film, because fury would require passion. Dark Shadows wants to be frightful, but it’s just frightfully dull.

Any proper adaptation of Dark Shadows, even one that acknowledges and celebrates its camp silliness as much as Burton's does, has to immerse itself in soap opera, too, and it's here that the director's lack of conviction becomes apparent.