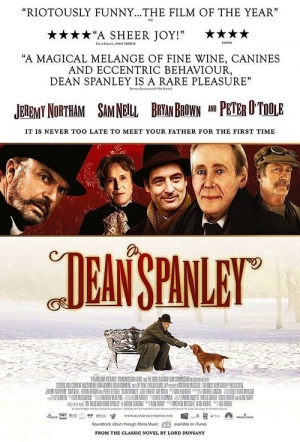 Dean Spanley sees local boy Toa Fraser return to the director's chair after his successful debut project No. 2. This was warmly received by critics and audiences at its premiere at Toronto Film Festival 2008.

Set in Edwardian England, this is a fantastical dramatic comedy about the relationship between the cantankerous Fisk Snr (legendary Peter O’Toole) and son, Fisk Jnr (Northam). A passing interest in the "transmigration of souls" (that's reincarnation to you and I) develops into much more when Fisk Jnr meets new clergyman Dean Spanley (Sam Neill). An odd chappy, Spanley - upon sipping on his favourite, exotic wine - seems to recall a former life. These strange insights relate to the Fisk family's past, and arise unexpected emotions for father and son.

It's a dog's past life in "Dean Spanley," an immaculately cast, nicely handled and wafer-thin slice of Brit period-dress whimsy. Represents an odd sophomore feature choice for New Zealander Toa Fraser, whose big-hearted Maori family drama "No. 2" should have made more waves internationally... it does have its peculiar charms. But it's a talky, narrowly focused piece that feels like an after-dinner anecdote presented with the full ceremony of a formal meal. Pic will flit through theaters before finding more comfortable smallscreen berths.

This is a delightful, oddly moving film, immaculately acted, carefully skirting whimsy, and nicely located in its period.

It is an intelligent, kind and gentle movie, with a lovely tale and a message about the glories of dogs and baying at the Moon. And every man, it seems, should have a dog.

A touching story of filial love and a delight to watch.

It's a rather ludicrous setup for Toa Fraser’s Edwardian comedy; if it’s a premise you can swallow, you’ll probably enjoy the whole ripping yarn. The banter is quietly pithy, and the daft story eventually builds to a surprisingly moving conclusion – thanks largely to yet another masterful turn from O’Toole.

A dull and thoroughly stilly British drama based on the idea of canine reincarnation.

Wilfully whimsical and determinedly eccentric, this faintly bonkers period tale won’t be for everyone. But if you fall for Dean Spanley, you’ll fall hard.

Ingenious and absorbing, nothing is over-played in this English-New Zealand co- production, which was shot in both countries. From Don McGlashan's perfect score to Leon Narbey's gorgeous cinematography in muted shades that give way to golden tones of memory, this is a gently amusing, thoroughly entertaining and moving film. The theme of bereavement and reincarnation gives way to rebirth and the recreation of a thwarted relationship with great grace and style. Recommended for dog lovers and anyone with a heart.