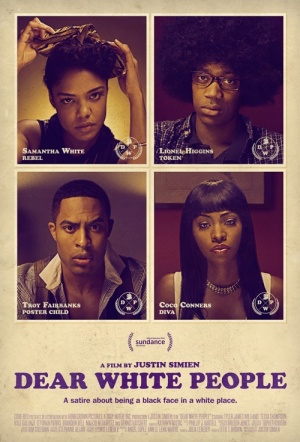 Sundance-winning comedy, with its crosshairs on race and racism in America, following four black students in the midst of a racial controversy at their Ivy League college.

"The clamor over Sam's rise also becomes a career-defining opportunity for black misfit Lionel Higgins when he is asked to join the school’s lily-white newspaper staff to cover the controversy, even though he secretly knows little about black culture." (Sundance Film Festival)

While it veers toward smugness and self-satisfaction at times, the Spike-Lee-lite exercise nonetheless heralds a fresh and funny new voice on the scene.

Despite some melodramatic moments and an overabundance of characters and incidents, the film smartly pinpoints people's universal need for acceptance and belonging.

One of the most vibrant, engaging debuts at this year's Sundance Film Festival.