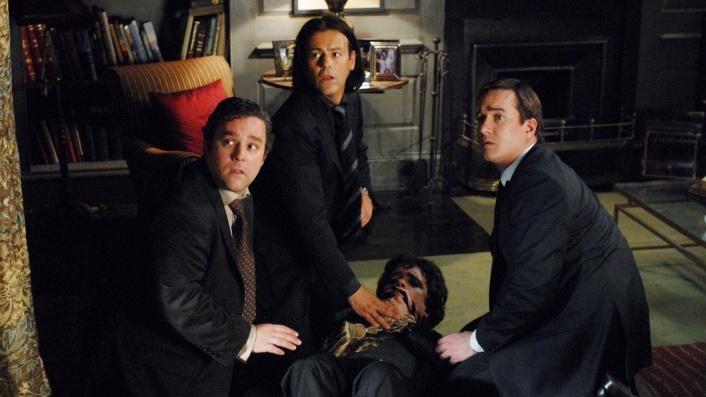 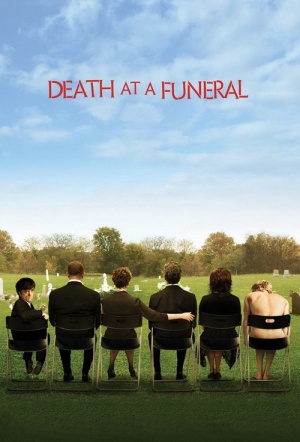 Matthew McFadyen (In My Father’s Den) plays Daniel, who’s returned home for the death of his father. As the most responsible member of a chaotic and dysfunctional family, he’s busy trying to keep it all together. Things start off badly when the wrong coffin arrives at the house, get worse when his successful but reckless novelist brother tells him he’s can’t help pay for the funeral, and slide even further downhill when his cousin’s new boyfriend accidentally takes some hallucinogens. When a mysterious dwarf takes Daniel aside at the funeral to reveal a secret affair with his dead father, things really being to plummet.

When Death at a Funeral was scheduled to screen on opening night at the New Zealand International Film Festival, there were hoots of derision coming from the more refined cinema-goers. What was a film by Frank Oz, director of the rather plain Stepford Wives remake and The Muppets Take Manhattan, doing in such a typically arthouse environment? Ticket sales proved them wrong, however, and the packed theatre was so enchanted that one could hardly hear the film over the uproarious laughter from the audience. Death at a Funeral was a hit.

There's no dearth of rude humor on screens right now, but Death at a Funeral stands apart because its characters - mostly reserved upper-middle-class British folk who have gathered to bury a patriarch - are determined to keep a stiff upper lip no matter what.

Scientists believe that black holes can slow down the progress of time. A similar effect can be felt by viewers of this damp squib of a farce as it grinds on from one lame set-up to the next.

The humor manages to be simultaneously sophisticated, supremely silly and very dark. If you don't laugh at the preposterous situations a grieving family becomes entangled in - a naked mourner and a secret about the dead man that could blow the lid right off his coffin, for samplers - you may require some kind of scan to check the health of your funny bone.

It's interesting to note that virtually every reputable American critic adored Death at a Funeral and every decent English critic loathed it. You may draw your own conclusions from that, but it's worth bearing in mind that American humour is not exactly subtle and Wasp Americans love seeing Brits make idiots of themselves because they secretly envy them...

Death at a Funeral is lethal farce, combining hints of The Lavender Hill Mob, doses of Joe Orton and a smidgen of the Farrelly brothers' scatology in its mix. It's sillier but funnier than Knocked Up, the summer's other notable comedy.

Death At A Funeral was a surprise hit at the New Zealand International Film Festival earlier this year and while it's absurd, it's also a lot of fun...

Death at a Funeral (2007) is available to stream in New Zealand now on Google Play and Apple TV.