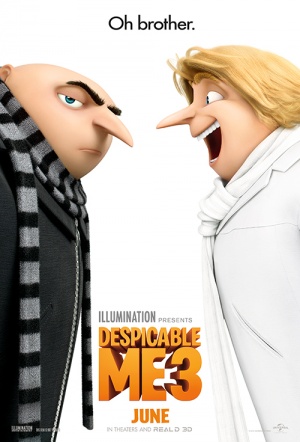 Gru (Carell) faces off against Balthazar Bratt (Parker), a former child star who grows up to become obsessed with the character he played in the '80s, and gets into some sibling rivalry when he meets his long lost twin brother, Dru (also Carell).

The Despicable Me films aren’t exactly Pixar classics, but they’re sweet-n-simple stories about a bad guy who learned to be good for the sake of his three adopted daughters. Sure, the films occasionally sold themselves out to parents by shoehorning in a dance number set to a song from their youth, but at least they got the basics right. Unfortunately, Despicable Me 3 exists only to sell out.

"Despicable Me 3" is unwieldy, but it mostly works, as co-directors Pierre Coffin (who also voices the Minions) and Kyle Balda never lose sight of the film's emotional center, packing the rest with as much humour as they can manage.

The latest animated "Despicable Me" outing shows signs of wear even as its energy level escalates.

Marks the point that TV shows typically get to around season seven, when the writers have run out of viable plot lines and have to fill the void with desperate, random invention.

It's the Despicable Me films that now represent "kids' cartoons'" most intelligently put-together and resonant storytelling.

The proceedings are also buoyed by such franchise mainstays as the endearing sweetness of Gru's relationship with his three adopted daughters and the mildly European aesthetic that helps distinguish these films from their peers.

It’s an if-it-ain’t-broke-then-don’t-fix-it approach that works just fine if you’re simply looking to take another ride on the rollercoaster...