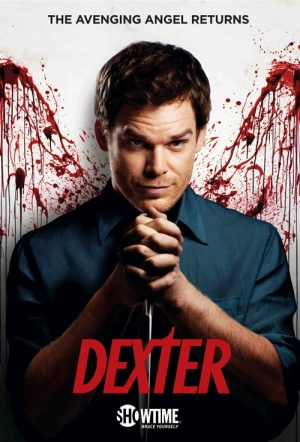 "Dexter considers the nature of faith while stalking the Doomsday Killer (Colin Hanks), a vicious, deluded, religious fanatic who displays his victims in grisly, Biblical-themed tableaux; Deb gets promoted to lieutenant and reconsiders her relationship with Dexter; Quinn goes on a season-long bender that threatens his partnership with Batista; Masuka hires an intern who is in awe of Dexter." (Official Synopsis)

This was the first year that Dexter really and truly acted just plain dumb...

Hall continues to impress with his sly comic skills and unreadable face.

It almost feels too light.

Dexter has convinced me that perhaps it's got a few gasps left in its lungs, and that's not a minor accomplishment.

There's an interesting switcheroo halfway and a game- altering climax, but this is not quite Dexter at his blood-splattered best.

The early Dexters were clever, sly and engrossing but, sad to say, the show seems to be suffering a slow and painful death.

Wherein a series that once deftly balanced dry wit and pulp opera becomes paralyzed by chatter, and the most memorable scene involves a floater's gut leaking CGI snakes.

The writers are treading water, waiting for the green light to send this story where we all know it eventually is going.

Creatively speaking, the current season looks like it's going to require a major late-act rescue.

If there's a TV writers' version of Stockholm syndrome, Dexter is Exhibit A.