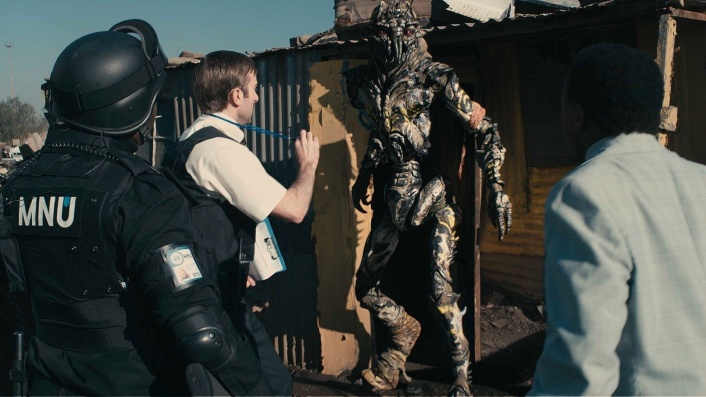 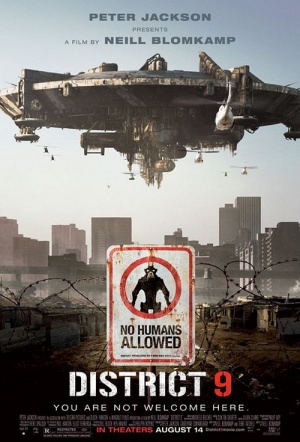 Almost thirty years ago, aliens arrived in Johannesburg. Their ship had broken down and they became the world's refugees. Their pesky presence made them despised by humans – referred to as 'prawns' for their disgusting features – and their makeshift home quickly became a slum. And now, as tensions rise between species, dorkish government official Wikus van der Merwe accidently discovers a highly lucrative alien secret. He becomes the object of a vicious government manhunt and, with nowhere else to go, he hides in the only place left: District 9.

In the best B-movie tradition, the filmmakers embed their ideas in an ingenious, propulsive and suspenseful genre entertainment, one that respects your intelligence even as it makes your eyes pop (and, once in a while, your stomach turn).

This baby has the stuff to end the movie summer on a note of dazzle and distinction.

Despite its creativity, the movie remains space opera and avoids the higher realms of science-fiction.

District 9 is very smart sci-fi, but that's just the beginning; it's also a scathing social satire hidden inside a terrific action thriller teeming with gross aliens and regrettable inter-species conflict. And it's a blast...

A genuinely original science fiction film that grabs you immediately, not letting go until the final shot.

It is a smart, satirical, raucous and glorious pile of a film. It hits the ground running, and barely pauses for breath until the credits roll.