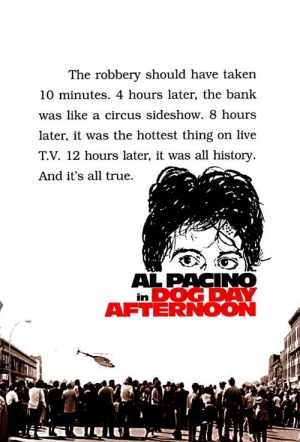 Two gay Brooklyn men, Sonny (Pacino) and Sal (John Cazale), attempt a quick-and-loose bank heist, armed with rifles. But despite the cooperation of the staff, they soon discover the vault is near empty. Before long, the street is swarming with cops, the public and the media.

Writer Frank Pierson won an Oscar for his script.

Filmmaking at its best.

It's beautifully acted by performers who appear to have grown up on the city's sidewalks in the heat and hopelessness of an endless midsummer.

But Lumet's film is also a study of a fascinating character: Sonny, the bank robber who takes charge, played by Al Pacino as a compulsive and most complex man.

Pacino simmers in this daring and brilliantly constructed treatise on the many facets of a crime.