Rips and tears itself apart!

A somewhat passable movie adaptation of the beloved game series which stays true to some extent of originality and set design. I appreciated the unique way of filming which gave me chills which resonate with the stereotypical 'science-gone-wrong' Horror situations, such as Aliens (1986). This movie may not rank as high up there but succeeds in formulating a narrative that is believable with some authentic acting and action sequences.

This movie benefits from some solid casting for the major roles, especially Dwayne Johnson as Sarge, with the stone-cold, militaristic nature that blends well with his pro-wrestling background. Throughout the movie we witness his overindulgence in servitude and protection of the greater good, even destroying innocent lives to ensure population safety. AS such, his subtle breaches in moral codes brings out the best in dialogue from his peers, especially John and 'The Kid', who question his moral actions and therefore drives the storyline forward.

The storyline follows a group of Space Marines who are called to investigate an incident at a research facility at Mars. What follows is suspense-drive, adrenaline-packed adventure into horror with excellent set displays and use of the environment. You really get the feeling that the environment was maximally used for added effect instead of just being there for visual satisfaction. On top of that, the complex divisions in morality which develop as the movie progresses adds another layer of speculation as to the fates of the survivors they find there. Furthermore, the build up of tension and fear also propels this film into new territories.

One scene itself deserves more appraisal for inducing suspense and fear more than the demons/zombies they encounter. 'The Kid's negligence to follow Sarge's order to eliminate the civilians only complicates the narrative as we speculate whether civilian safety is priority over the level of threat. The strikingly opposing thoughts between the 2 characters, one driven by protocols and the other by morality, brings forth an added element which seemed non-existent in the game itself. For a supposedly weak entry into game-to-movie adaptations, this film atleast sought to provoke emotions and invested time in character development and dialogue.

Nevertheless, this movie will always be viewed negatively compared to the fan-favourite game due to failure to include more elements of the series which seemed original. The monsters seemed mediocre for the most part, riddled with inconsistencies. Most of the characters failed to exude persona for them to be appreciated. Compare this to the space military unit from Aliens (1986), all of who were distinctly unique and likable, and you'll see how modern movie tropes fail to capture the essence of character in dangerous situations.

I was extremely disappointed by the 'first-person' action sequence which was portrayed in this film as it felt like a cheesy and dumbed down version of the game. The monsters failed to prove lethal enough for me to feel the same level of fear I felt in the start. The vague sequence only seeks to undermine the final product, unaffectionately implying the lack of creative input from the filmmakers to establish a stand-alone re-imagination of a beloved gaming series.

This poorly visualised action sequence felt drawn out and overwhelming for an audience who would rather get a kick out of character portrayals and sense of danger. If anything, it only worsened my headache as it felt like a cheap tribute to the gameplay. At the end, the final battle between John and Sarge lacked the motivational drive and investment to fully be appreciated. As such, this movie just felt like a 'Resident Evil-esque' formula with lack of originality and progressively getting absurd. Nevertheless, this movie doesn't go way below the mark as did the recent entry (Doom: Annihilation). 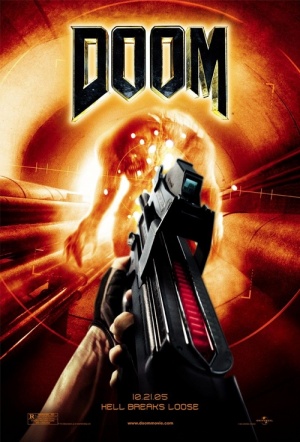