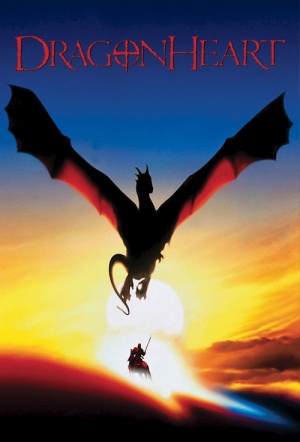 In an ancient time, a disillusioned knight makes a pact with the last living dragon (brought to life by CGI, Industrial Light & Magic and the voice of Sean Connery) to unite against an evil despot. Stars Dennis Quaid.

A dying prince is given part of the heart of dragon, in return for becoming a fair and just ruler when he takes the throne. The boy disregards his promise and becomes the cruel and corrupt King Einon (David Thewlis). Bowen (Dennis Quaid), the knight that once mentored the boy, believes the dragon's heart is responsible for Einon's twisted cruelty and becomes a dragon slayer. He comes upon dragon Draco (Connery), who points out that once he has slayed all dragons he'll no longer be employed. They come to a mutually beneficial arrangement where Bowen pretends to slay Draco in return for payment from villages for his "protection". After their con is exposed, the pair realise their true destiny is to defeat the evil King Einon.

Sean Connery's Draco was the first speaking CGI-animated character to feature in a full-length film.

It's all very impressive, but they forgot to fill out any of their human characters with personalities.

The crux, and the quality, of this thin fable is in the quirky and well-played relationship between Quaid's knight and Connery's dragon.