Expect The Expected Until It Comes To Colin Farrell's Arm

A classic heart felt Disney movie that takes you on a roller-coaster of emotions. With an overly exaggerated love for a computerized elephant trying to find his feet in the world, or should we say; ears! A classic tale of try, fail and try again, with the ultimate ending of success. A very predictable linear with the classic happy ending. The motion graphics were good until it came to Colin Farrell's 'missing arm' which seemed to have no real relevance to the narrative or his character, other than a soldier returning from war and scaring his children with the concept. Also when it comes to characters, you have the classic good guys vs. bad guys, but there seems to be a lost angle on the dead mother, and as a viewer you are left wondering what happened to her. The emphasis of the movie was obviously focusing around the idea of the flying elephant, although I would have liked to have seen Disney tackle the area around animal cruelty more in depth, given how far we have come in society, and the values Disney embed into children. Overall a fun, family film that's entertaining to the eye and pulls on the heart strings. 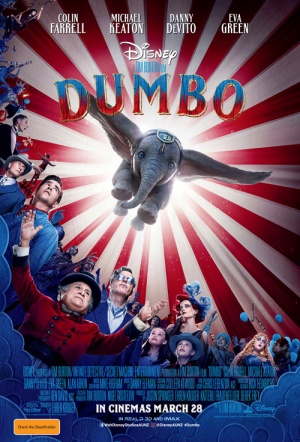