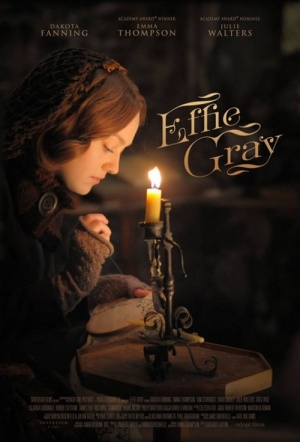 In a time when neither divorce nor gay marriage were an option, the story of Gray's strained marriage to renowned art critic John Ruskin (Greg Wise) and her affair with artist John Everett Millais (Tom Sturridge) explores the roots of sexual intolerance and the marital politics of the Victorian era.

Shot in 2012, the film's release was delayed due to lawsuits claiming Thompson's scripts were plagiarised. The first was from an un-produced screenplay and the second from a stageplay, both on the same subject. Thompson won the cases.

The result is dark and offbeat, but as a murky anti-romance, Gray is undeniably effective.

It may be billed as a "love triangle", but there's precious little love on display, even in our heroine's growing affection for pre-Raphaelite painter John Everett Millais.

The best thing about the ultimately involving way this romantic drama ends up on screen is that it's sure to arouse enough interest to make those who don't already know the outcome more than eager to look it up.