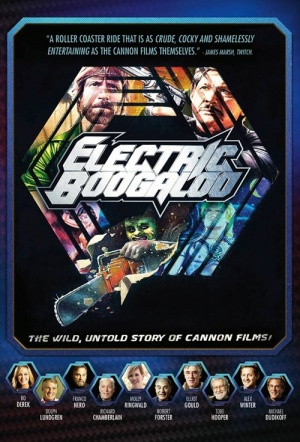 Melbourne director Mark Hartley (Not Quite Hollywood) continues his documentary disinterment of down-market movie detritus with this chronicle of the rise and fall of 1980s action-exploitation juggernaut Cannon Films - whose output included American Ninja, The Delta Force, Death Wish II and Masters of the Universe.

"All genre fans are familiar with the iconic hexagonal logo of Cannon Films. Revamped in the 1980s by film-obsessed Israeli expats Menahem Golan (who passed away last month, aged 85) and Yoram Globus as the premier production house for low-budget, high-return genre moviemaking, Cannon changed the way that populist films were financed, produced, and marketed. Yet even while the company made its cheerfully disreputable name churning out unabashed exploitation fare — from Breakin' and Lifeforce to the Chuck Norris vehicle Invasion U.S.A. and the belated sequels to Michael Winner's Death Wish and Tobe Hooper's The Texas Chainsaw Massacre — it also pursued art-house respectability by financing such projects as John Cassavetes's Love Streams, Jean-Luc Godard's King Lear, and Franco Zeffirelli's filmisation of Verdi's Otello." (Toronto Film Festival)

While bad movies make for great anecdotes, the doco’s cultural perspective is slight.

A fun, albeit narrow, look at the ups and downs of two over-the-top moguls.

Eighties trash cultists will have a (Cannon) ball.