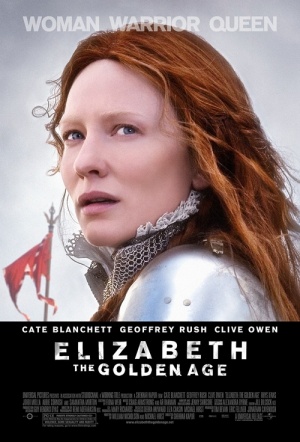 Reprising her role from 1998's Elizabeth is Cate Blanchett, as Queen Elizabeth I. This historical epic finds the Queen growing keenly aware of the changing religious and political tides of late 16th Century Europe. Her rule is challenged by the Spanish army, led by King Philip II (Jordi Molla) - determined to restore England to Catholicism.

Preparing for war, Elizabeth tries to balance ancient royal duties with the slimy underbelly of her monarchy: traitors and assassination plots. She also finds in herself an unexpected vulnerability as she falls for seafarer Sir Walter Raleigh (Clive Owen). Unable to pursue the romance, the Queen encourages her lady-in-waiting Bess (Abbie Cornish), to befriend Raleigh and keep him near. But this strategy forces Elizabeth to observe their growing intimacy. Also starring Geoffrey Rush as her trusted advisor, Sir Francis Walsingham.

Where Kapur's first Elizabeth was cool, cerebral, fascinatingly concerned with complex plotting, the new movie is pitched at the level of a Jean Plaidy romantic novel.

[Historical] inaccuracy isn't the biggest issue here. It's simply that Kapur, once again, has taken a story with plenty of juice and bled it into something pale and limp.

Over-indulgent and melodramatic, as is the nature of artistic mythmaking, The Golden Age will beguile and repel in equal measure. The performances are supreme, although some viewers may struggle to reconcile the director’s epic intentions.

All in all, Elizabeth The Golden Age is a lousy film with some great trappings. In a comfy seat, with a glass of sav', and a few friends to have a laugh with, you could do a lot worse...

While trying to do too much, this Elizabeth brings to mind that Elizabethan bard's line: "full of sound and fury, signifying nothing"...

It's a wonderfully seductive, grandiose, unashamedly operatic portrayal of Queen Elizabeth's finest hour, and it's even more rousing because of the chinks already exposed in her armour. Kapur plays up every high note with arresting imagery that wouldn't be out of place in a 16th century royal portrait. Throw away the history books and behold the majesty.