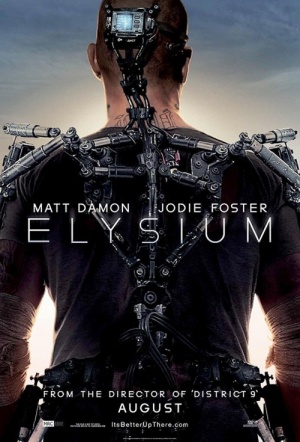 Matt Damon and Jodie Foster star in Neill Blomkamp's (District 9) second film about a futuristic battle raging between the people stuck on a wasteland Earth and the wealthy citizens of Elysium, a luxurious floating utopia.

In the year 2159 two classes of people exist: the very wealthy who live on the pristine man-made space station, and the rest who live on overpopulated Earth. Secretary Rhodes (Foster), a hard line government ofﬁcial, will stop at nothing to enforce anti-immigration laws and preserve the lifestyle of the elite citizens of Elysium. That doesn’t stop the people of Earth from trying to get in, by any means they can. When unlucky Max (Damon) is backed into a corner, he agrees to take on a daunting mission that if successful will not only save his life, but could bring equality to these polarised worlds.

Elysium doesn't quite build on the dazzling potential of District 9, but it doesn't fail the previous film either. Blomkamp has crafted another superior sci-fi action thriller that demands emotional investment – I felt every moment here, and I can't wait to do so again, over and over.

Even working within a more conventional framework, Blomkamp again proves to be a superb storyteller. He has a master’s sense of pacing, slowly immersing us into his future world rather than assailing us with nonstop action, and envisioning that world with an architect’s eye for the smallest details.

This perfectly alright actioner will entertain newcomers, while leaving Blomkamp fans in a holding pattern until his next project.

Damon's performance helps keep the movie from sinking under the weight of its artfully constructed horrors.

For all its simple politics, clanging dialogue, and underwritten roles—only Damon’s natural, and deepening, ability to suggest unspoken disappointment gives his character dimension—Elysium works, though never as well as it should.

All the interest and good will built up by the sharply conceived preliminaries is washed away in a succession of scenes that feel crushingly routine and generic, not to mentioned guided by ideological urges.

Not perfect, but a much more satisfying Earth-in-ruins film than Oblivion or After Earth. It is a little more conventional than District 9 (what isn’t?), but confirms Blomkamp as one of the potential science-fiction greats of this decade.