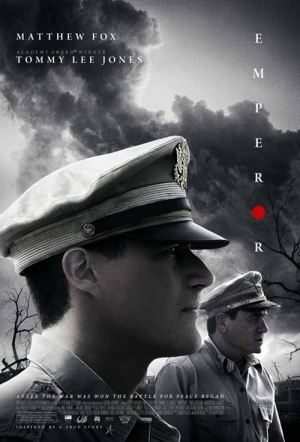 War drama with Tommy Lee Jones as US General Douglas MacArthur. After Japanese Emperor Hirohito’s surrender to the allies after WWII, MacArthur and his adjutant General Fellers (Matthew Fox) are faced with a decision of historic importance. Shot in New Zealand.

"The events of that summer (including the Emperor's surrender of any claim of divinity), galvanised by the dropping of the atomic bomb on Hiroshima and Nagasaki, signalled much more than mere military defeat for Japan: it called into question the country’s most entrenched beliefs... As de facto ruler of Japan in his position as Supreme Commander of the occupying forces, it falls to MacArthur to decide whether or not Hirohito should be tried and executed as a war criminal. He appoints his protégé Fellers, a leading expert on Japan, to head the investigation. As they grapple with their weighty responsibility, Fellers becomes haunted by a love affair with Aya (Eriko Hatsune), a Japanese exchange student he met some years before." (Toronto International Film Festival)