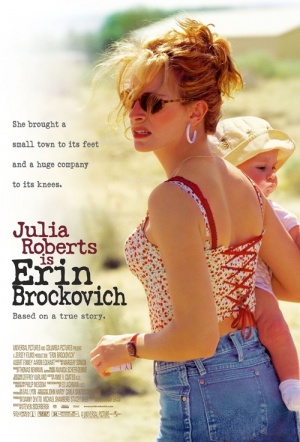 A completely involving movie that will grab you from the first frame of film to the closing credits.

One of the gutsiest, most exciting, and most satisfying courtroom docudramas ever, one that genuinely lifts the spirits as you watch it.

Atop all the talk about this being Roberts' career performance so far (and it is), it would be unjust to overlook that this is also the best screen role Finney has had in years.

(Soderbergh's) knack for getting career-defining turns from actors is intact.

It's easy to forget you're watching a performance.

What Soderbergh can do as well as anyone is bring restraint, intelligence and subtlety to mainstream material, and what a difference that makes.

Ultimately the story seems rather slight.

The film lacks focus and energy, the character development is facile and thin, and what about those necklines?

There is never a dull moment.

Roberts is in nearly every scene of Erin Brockovich, and there isn't a second when we're not on her side.

Beginning to end, Brockovich is a winner.

The movie slows down only when it deals with Brockovich's personal life... Fortunately, the main focus is the lawsuit, and that's a story worth following...

Roberts carries the film in the best sense, by taking us on a human journey of genuine discovery and growth.