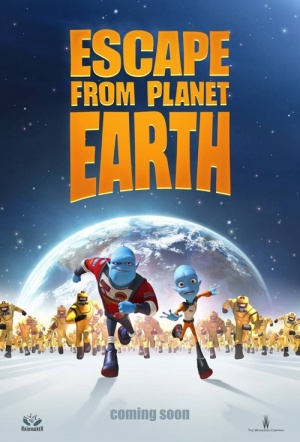 Animated family sci-fi about superstar alien explorer Scorch Supernova (voiced by Brendan Fraser) who embarks on an expedition to a notoriously dangerous planet, only to be captured by the most feared creatures in the entire galaxy: the human race. With Scorch missing in action, it's up to his by-the-books brother Gary to rescue him from Area 51 and thwart a US military leader bent on galactic domination. Also features the vocal talents of Sarah Jessica Parker, William Shatner, Ricky Gervais, Jane Lynch and Jessica Alba.

Scorch is one of planet Baab's biggest superstars, a heroic explorer famous for his adventures on other planets. While he's the brawn, his brother Gary (Rob Corddry) is the brain, manning mission control and making sure everything goes smoothly. But when sibling rivalry gets the better of the pair and Scorch sets off for Earth without Gary's help, Baab's number one hero finds himself captured and locked up alongside other aliens in Area 51. With adventure-hungry son Kip goading him into action, Gary heads to Earth to rescue his brother. There he'll confront Area 51 boss Shanker (Shatner) to not only free Scorch but also stop Shanker getting his trigger-happy mitts on enough alien weaponry to rule the galaxy.

A bright, loud assault on the senses, Escape from Planet Earth uses overstimulation to paper over what adults will perceive as a lack of interesting plot, voice performances or humour.

A lightweight, warp-speed, brightly colored trifle that should delight small children and sporadically amuse their parents.

A children's movie about space-traveling blue beings that has lots of high-flying escapades but fairly low aspirations.

It never discovers new worlds, but it is in its genial way, escape enough.

Passable animated entertainment is stronger on humor than adventure.

It's unchallenging fun for a younger crowd, but adults might feel like they're staring down a colorful 24-piece board puzzle, trying to figure out how such a simple activity could be drawn out over 90 minutes.