Review: Everybody Wants Some!!

A tale of boys with puerile genital fixations and barely-covered girls who exist only for the male sex drive.

The 'nostalgia coming of age' film portrays the times and events that define a person as they progress through life's rites of passage. They share similarities with the historical bio-pic in trying to capture the look and mood of times gone by but without the historically important people. An example of one that works brilliantly is Richard Linklater's widely acclaimed Boyhood (2014). If you are a fan of that film you will remember the lyrically tender and aesthetically poignant study of a small boy's progression to a college-ready teenager. However, if you expect to find those qualities in Linklater's latest film Everyone Wants Some (2016) you are in for a shock.

As far as plot goes, the film looks at a group of young baseball heroes in the three days before collage starts in 1980. The campus dorms are crowded and the city has donated two houses, so there are no real impediments to the boys being boys. The story unfolds through the eyes of ace-pitcher Jake (Blake Jenner) who arrives, settles in, and quickly becomes absorbed into non-stop male-bonding rituals of misogynistic drunken stupidity. The boys have puerile genital fixations and the girls are reduced to barely-covered primal flesh and exist only to yield to or thwart the male sex drive. Late in the film, Jake meets Beverly (Zoey Deutch) and takes tentative steps towards a mutually caring relationship, but this narrative capsule within the film appears only to seek redemption for everything else in it. Alchohol, drugs, and sexual bravado are the binding agents of this male tribe, and when class actually starts we see two of them fall asleep while their professor welcomes them to college.

Nostalgia films rely on authenticity, but this film is cast with little known actors around their 30's in roles that require the innocent freshness of 19 year olds. The casting robs the film of authenticity, and in any case, the non-stop debauchery does not resemble anything like what most mature males have stored in their nostalgia files. Perhaps it all depends on where you were and who you mixed with in your formative years. If this is a nostalgic homage to the 1980s, stop and consider the scale of today's sexual violence against women and the endemic sexual discrimination still embedded in our society. Then join the dots and ask exactly what is being celebrated in this film? As someone who loves the film artform, I try to find at least something to admire in every film but this time I cannot.
0 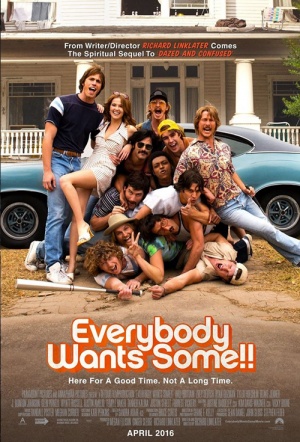