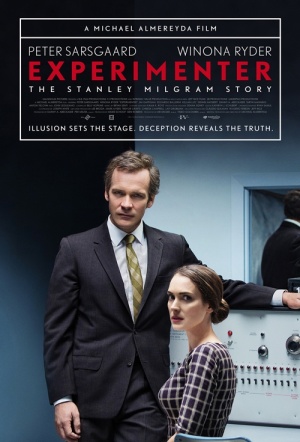 "The experiments observed the responses of ordinary people asked to send harmful electrical shocks to a stranger. Despite pleadings from the person they were shocking, 65 percent of subjects obeyed commands from a lab-coated authority figure to deliver potentially fatal currents. With Adolf Eichmann's trial airing in living rooms across America, Milgram's Kafkaesque results hit a nerve, and he was accused of being a deceptive, manipulative monster." (Sundance Film Festival)

Upon hearing about the Stanley Milgrim obedience experiments in Psych 101, many undergrads – myself included – instantly thought "Holy shit, this needs to be a movie!" But while I may have wanted an overblown psychological thriller, Experimenter instead examines the head of the man who spent his career examining everyone else's. Filmmaker Michael Almereyda does the latter so well, it makes my idea look really stupid in hindsight.

Almereyda dissects the life and work of controversial psychologist Stanley Milgram in a highly stylized biopic worthy of its subject.

It encourages us to think deeply, from the first frame to the last, even if it's just to consider what on Earth an elephant is doing on screen.

Finds a glimmer of hope by simply revealing itself. Maybe if more people are educated about the dangers of obedience, they'll put up more resistance. It can't hurt to hope.

Almereyda has created an experiment of his own: a kind of cinematic Rorschach test, prodding viewers to consider what they would do if sitting in the same seat as Milgram's subjects.

Not awards bait but makes some Big Thinker biographies that are look staid.