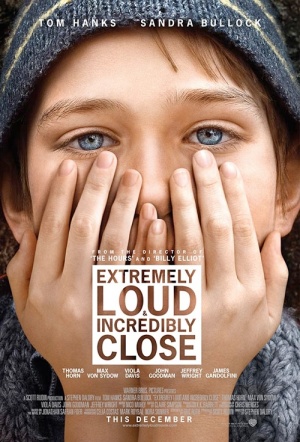 Based on the novel by Jonathan Safran Foer, directed by Stephen Daldry (The Reader, Billy Elliot), this drama tells the story of a young boy's journey after his father's death in the 9/11 terrorist attacks. Stars Tom Hanks and Sandra Bullock.

11-year-old Oskar Schell (newcomer Thomas Horn): academic, amateur inventor, vegan, pacifist. After finding a mysterious key that belonged to his dad (Hanks), who died in the World Trade Center attack, he embarks on a secret search of New York's five boroughs for the lock-box the key will open.

Moving, if heavy-handed, it's an emotional walkabout with real heart.

Sorry, but there must be richer ways of dramatizing so obvious a theme.

A meaty whiff of phoney-baloney rises from this extremely contrived and incredibly preposterous movie, a mawkish, precious and bizarre fantasy of emotional pain.

Solidly crafted, impeccably acted and self-important in the way that Oscar loves, 'Extremely Loud' is also incredibly close to exploitation.

This plot is contrivance and folderol.

A film filled with both sentiment and substance.

It's challenging, divisive and has moments of beauty but leaves you cold.

You rather end up wishing Extremely Loud & Incredibly Close would just pipe down and back off.