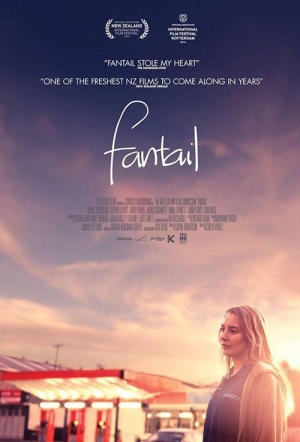 A South Auckland petrol station is the setting for this independent drama about graveyard shift worker Tania (Sophie Henderson, also the film’s writer and based on her one-woman stageplay), whose long nights are spent chipping away at the savings she needs to leave with her little brother in search of their father.

Raised Maori, Tania’s bonds to her whanau underpin a life spent caring for her ailing mother during the day and preparing to take her brother Piwakawaka overseas. But as he leaves to pick kiwifruit and Tania is stuck at the gas station with a slack manager and an eagle-eyed regional supervisor, it seems she’s not able to look after her family to the same extent.

In similar fashion to 2013’s Oscar Wilde-inspired The Selfish Giant, Fantail brings a Maori fable to a local lower-class setting. Mostly set at a South Auckland petrol station, first-time feature director Curtis Vowell achieves the sombre look and visual grit such a lonesome location requires, allowing actress/writer/wife Sophie Henderson to soak it all up with her vibrant, absorbing performance.

The well-crafted story trips along at quite a pace, proffering surprises as well as flashes of nastiness.

I was gobsmacked by it. The acting talent is absolutely stunning.

One of the freshest New Zealand films to come along in years. Displaying an emotional assuredness rarely seen in debut films,... often-hilarious and occasionally devastating.

Even with these flaws, it’s an effective and engaging film.