Fantastic Beasts and Where to Find Them 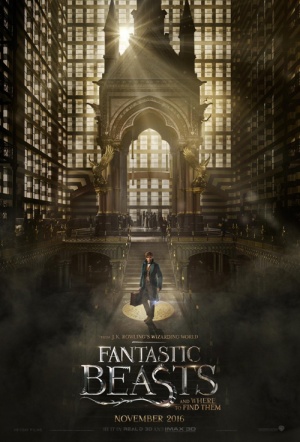 Author J. K. Rowling and director David Yates return to the Harry Potter universe with this spinoff story, starring Oscar-winner Eddie Redmayne (The Theory of Everything) as writer Newt Scamander who discovers an underground community of witches and wizards in New York - 70 years before Harry reads his book.

Fantastic Beasts and Where to Find Them / Reviews

The first non-Harry film in the Potter-verse favours a 1926 New York setting that follows characters pivotal to the Harry Potter mythology. If you’re not aware that Newt Scamander (Eddie Redmayne) was a magical zoologist who wrote a textbook or that Gellert Grindelwald fought Dumbledore in an infamous battle for something-or-rather, Fantastic Beasts defines itself so well that newbies can easily follow while nerd eyes will soak up all the new details.

"Fantastic Beasts" has clearly been designed for the most devoted of Rowling's fans, and though it may prove confusing to newcomers, the faithful will appreciate the fact the film never talks down to its audience.

This first instalment showcases just enough of them to make you sign up for the full expedition.

I'm not sure which is more adorable, Eddie Redmayne as Newt Scamander, or the creatures he smuggles into the US in his battered leather briefcase.

Rowling and Yates have given us a terrifically good-natured, unpretentious and irresistibly buoyant film.

This film starts off playfully and then gets, at times, extraordinarily intense and threatening.

A surprisingly intimate watch given its scale, with moments of real tenderness.

Likely to draw in just about everyone who followed the Potter series and to please most of them, the picture also has things to offer for fantasy-friendly moviegoers who only casually observed that phenomenon.

With this heavy lifting done, there's every reason to hope for an even more magical adventure next time.

Who needs Harry Potter? With 'Fantastic Beasts', it's undeniable that the clear star is screenwriter and 'Harry Potter' author J.K. Rowling.

Fantastic Beasts and Where to Find Them / Trailers