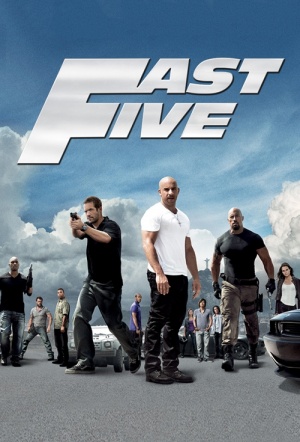 Fifth movie in The Fast and the Furious series, starring Vin Diesel, Paul Walker and introducing Dwayne Johnson to the saga. Follows the events of Fast & Furious when former cop Brian (Walker) and Mia (Jordana Brewster) broke ex-con Dom (Diesel) out of custody. While the cops look for them, they've blown across borders. Now backed into a corner in Rio de Janeiro, they've got a final, $100 million dollar heist to pull off to gain their freedom. Hard-nosed federal agent Luke Hobbs (Johnson) is assigned to track them down.

The Fast and Furious roadshow isn't slowing down a bit in Fast Five, by most measures the best of the bunch, combining fresh casting choices, interesting Rio locales and literally smashing bookended action sequences.

You'd think the Fast And The Furious franchise would've run out of gas by now. Think again.

As usual, the film thrives on excess.

Make no mistake, this is no masterpiece of the dramatic arts but it is probably the best since the original: lean, spectacular, funny and slightly less risible than its predecessors.

Utterly preposterous, but this car-crazy franchise is armor-plated.

Tough on nuance, tough on the causes of nuance, this episode has the highest velocity and lowest IQ yet. See it on the biggest, loudest, dumbest screen you can find.