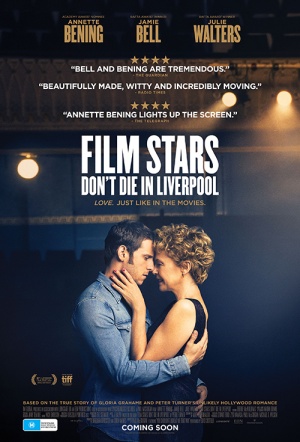 "Drawing on [Peter] Turner's memoir of the same name, director Paul McGuigan fashions a moving narrative that embraces the high and lows of the erstwhile Hollywood star's time spent living in Liverpool in the 1970s. Gloria (Bening) is in her fifties, but her vitality and eccentricity leave Peter (Bell), who is decades younger, enraptured by this outrageous new force in his life. As the two embark on their romance, we follow them from England to Los Angeles, from stage to hospital, and from laughter to tears." (Toronto International Film Festival)

Expectations for Film Stars Don’t Die in Liverpool were high, despite the clunky title, following a charming trailer and intriguing, true-story premise. This good looking big-screen adaptation of the memoirs of young Liverpudlian actor Peter Turner — played exuberantly by Jamie Bell, and chronicling his three-year, late 1970s love affair with faded American film noir actress Gloria Grahame, (Annette Bening) when he was 26 and she 54 — somehow failed to completely satisfy.

Over-production-designed as the film is, Bening and Bell manage to hold their own within it.

A real-life May-December romance, movingly told and acted. Bening and Bell give performances to cherish.

Brittle and insecure, yet also steely and magnetic, Bening's performance is full of nuance.

It's a beguiling story and Bell and Bening are tremendous as the star-crossed lovers.

Bening's performance channels years of close observation of what actors are like...

A sumptuous slice of movie making that deserves to find a wide audience.

First rate performances from the two leads, and a fine supporting cast, confirms this as an awards season contender.

Bell's commitment and depth to the role guarantees the film its emotional core throughout.

Bening and Bell together are imperishable.

Despite a few quibbles that viewers may have, there is no denying the emotional force that this film develops, and for that, we can credit talented filmmakers and two stars working at the height of their powers.

It's a classy weepy [sic] with some killer dialogue, but Bening is the big sell here. Given one of the juiciest roles of her career, she makes every moment count.