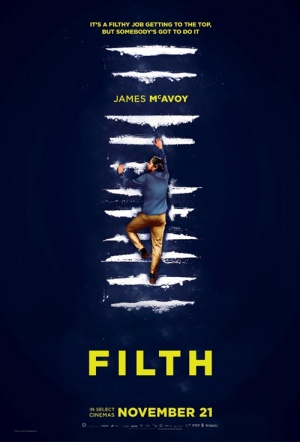 James McAvoy leads this UK crime comedy as a cop trying to make his way to the top of the promotions board in order to win back his wife and daughter. He’s also a dirty, drug-abusing, manipulative, alcoholic pervert. Based on the novel by Irvine Welsh (Trainspotting) and co-stars Imogen Poots (Fright Night), Jamie Bell (Billy Elliot) and Eddie Marsan (Sherlock Holmes).

When a Japanese tourist is brutally beaten to death by a group of young thugs, Detective Sergeant Bruce Robertson takes the case in an attempt to grease his boss’s gears and nail the promotion (as well as the wives of his fellow officers). Using the dirtiest of tactics, Bruce reckons he knows how to play the game. But his constant hallucinations and introspective psychotherapy bring to light a worrying connection between the crime and his former family…

No-one is safe from the vileness of James McAvoy’s loathsome cop Bruce Robertson in this dark tale of ambition, not even Robertson himself, as he claws his way towards the coveted role of detective inspector in a grubby Edinburgh. This is the same grotesque larger-than-life world as Irvine Welsh’s hit Trainspotting but without Danny Boyle’s pounding vibe and cool soundtrack.

Powered by a vigorous, image-shedding lead turn from James McAvoy as a coked-up Edinburgh detective on the fast track to either promotion or self-implosion, this descent into Scotch-marinated madness begins as ugly comedy, segues almost imperceptibly into farcical tragedy, and inevitably — perhaps intentionally — loses control in the process.

With McAvoy acting as if his life depends on it, Filth is the Irvine Welsh film we’ve been waiting years for. Tastier than a deep-fried Mars Bar.

This punky adaptation of Irvine Welsh’s novel Filth is a glossary of grimness, a dictionary of darkness. But it also dishes up humour that’s blacker than a winter’s night in the Highlands and unpolished anarchy that’s true to Welsh’s out-there, frighteningly frank prose.

I loved every minute of Filth, and couldn’t have stomached another second of it.

For the first half-hour it's got a full-on horrible energy, but there isn't enough humour for it to qualify as comedy, and not enough reality or plausible characterisation to justify calling it any sort of procedural noir.

Baird can be forgiven for a handful of careless and ham-fisted touches. Filth is still a hugely entertaining breath of foul air fueled by McAvoy’s impressively ugly star performance.

A bulked-up James McAvoy dominates the screen in this razor-sharp Glasgow smile of a black comedy, packed with aberrant sex, hard drugs and maximum David Soul.