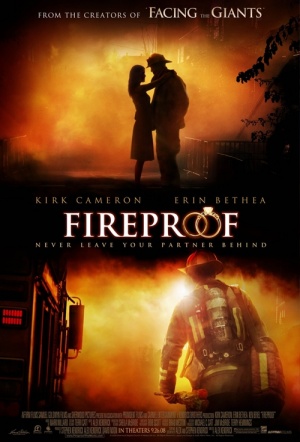 Every wondered what happened to Kirk Cameron from Growing Pains? Neither. But since we've broached the topic - he's a born again Christian, written a memoir called Still Growing, and is now starring as a fireman in faith-based drama Fireproof.

Married couple, Caleb (Cameron) and Catherine (Bethea) have their relationship on the rocks. A divorce imminent, Cableb's dad asks him to give it one last chance with "The Love Dare", a 40-day caring-for-marriage plan. While Caleb saves people from fires for a job, but he struggles to save his marriage. Film is of the movie-with-a-message genre, with a Christian underpinning. A handy spin-off is Fireproofmymarriage.com! Great.