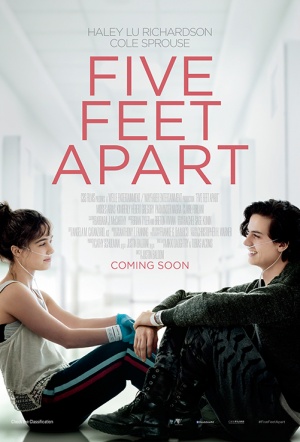 Cole Sprouse and Split's Haley Lu Richardson fall in love while in hospital in this teen romance that marks Justin Baldoni's feature debut.

While in hospital with a severe case of cystic fribrosis, seventeen-year-old Stella Grant (Richardson) meets a very charming fellow CF patient named Will Newman (Sprouse). Though instantly attracted to each other, restrictions mean they must maintain a safe distance between them. As their connection intensifies, so does temptation—and Will’s dangerous rebellion against his ongoing medical treatment. Stella gradually inspires Will to live life to the fullest, but can she ultimately save the person she loves when even a single touch is off limits?

Five Feet Apart is a film for the tumblr generation. It’s just a shame it’s seven or eight years late.

Richardson and Sprouse attack their roles with gusto, never patronising the material.

[Richardson] surely realises, as Fault's Shailene Woodley did before her, that this is the kind of marshmallow martyrdom that has to be briskly worked through before they let you at the grownup scripts.

It's the best tear-jerker in a long time; one box of tissues might not be enough. On a deeper level, it earns some of that emotion through a story based on a real dilemma.

Five Feet has enough charisma and chutzpah to set it apart from your bog-standard, manipulative disease-of-the-week drama that now seems to dominate streaming services.

Though a glossy, romantic drama aimed at a youth audience may not be the most realistic way to capture the cystic fibrosis experience; it does create awareness and understanding of cystic fibrosis.

Richardson can do just about anything, and her performance in "Five Feet Apart" demonstrates a new depth to her range. She brings a knowing soulfulness to every aspect of Stella's journey.

Its heart is in the right place, but its brain runs from it...

Sprouse and Richardson are proven heavyweights in the young-adult pocket of Hollywood, but this soft-hearted teen romance spreads on sugary sentiment too thickly to leave a lasting message.