A somewhat passable remake of the original with riveting cinematography and creating a dream-like atmosphere, which reflects the notion of 'afterlife'. 5 medical students attempt to 'flatline' to research on afterlife with dangerous outcomes. This movie does a good job at identifying the intrinsic value of life, which cannot be achieved by coming back from death.

This movie provides an excellent depiction of life after a near-death experience, with notions that supernatural forces push the members to redeem themselves from past mistakes etc. We see as each character, who had the near-death experience, attempt to right the wrongs of their past and reclaim their lives as if a way to redeem themselves. These different narratives work perfectly in a dream-like sequence and morphs into a creative art piece.

It is also refreshing to see inventive and creative ways that this movie adds Horror elements especially when this movie plays out more as a thriller. The haunting depictions of memories only create a surreal sense of dread for the survivors. The abnormally fascinating skills they achieve from these near-death experiences are interspersed with visions from bad memories which continue to haunt them. These extra-sensory visions help to drive the narrative in a positive direction where the survivors are forced to confront their past misdeeds or else ultimately be undone by these very visions.

This movie fails to capture the pure essence of the original movie in many ways, such as character development, sense of horror and plot development. It lacked the intuitive drive to propel to new heights as it just felt like 5-piece narrative of character redemption stories.

Despite the star-studded cast, the poor script, questionable decisions and poor character development undermined the final product. I feel like their dialogues could be significantly improved to make us appreciate their progression in this movie.

This movie suffers with the pace as the decision to provide 5 different character redemption stories separately only slows down the progression, ultimately leading to ambiguity of the end-product. This movie starts off great but progressively slows down or fails to piece a coordinated narrative. As such, it is difficult as viewer to appreciate the sentimental value behind making this remake as it doesn't offer a genuine investment into notions of afterlife.

Furthermore, it also felt uneven as some of the characters didn't have too difficult a redemption attempt to overcome the hauntings while the rest literally pushed themselves to death by the very things that haunt them. These uncoordinated storylines only dilutes the effectiveness of the end-product as it makes to wonder why some of these characters got more limelight when more serious traumas should be explored more intensely. 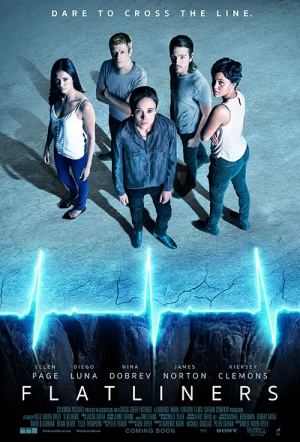