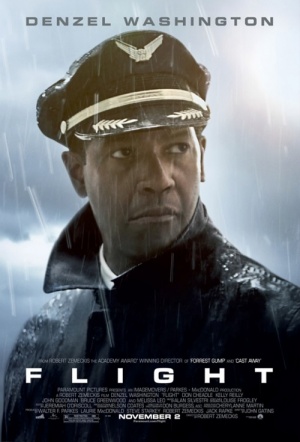 Denzel Washington gives an Oscar-nominated performance in this drama about an alcoholic airline pilot who spectacularly crash-lands his plane after a mid-air catastrophe, saving every soul on board. Whip (Washington) is hailed as a hero after the crash, but questions arise as to who or what was really at fault when alcohol and drugs are found in his blood. Co-stars John Goodman and Don Cheadle. Directed by Robert Zemeckis (Forrest Gump).

After a 12 year absence from live action filmmaking, Zemeckis returns to directing a feature with real people (as opposed to CGI puppets), with his last one being 2000's Cast Away.

Denzel Washington is aces as a commercial airline pilot who pulls off a miraculous mid-air stunt while flying with a 0.24 blood alcohol concentration, only to face his demons on the ground.

From the nerve-ripping crash to Washington’s stinging portrayal of a boozy pilot, Flight finds Zemeckis back on track after his bumpy mo-cap ride.

Even if you remove the questionable quasi-religious touches, Flight doesn't quite soar past its narrative limitations. There's plenty of virtuosity to go around here - just precious little transcendence.

Next to Gump, the film has the moral force of a George Steiner essay, but what lends it that force are not the carefully calibrated moral ambiguities of the script, but the bruised, defiant soul that appears to us in the form of Denzel Washington.

It is nearly flawless.

This absorbing drama provides Denzel Washington with one of his meatiest, most complex roles, and he flies with it.

A welcome return to live-action filmmaking for Zemeckis, who hasn't lost his knack for a brilliant shot or for extracting great performances. It may not exactly be a first-class experience throughout, but there's nothing wrong with premium economy.

Directing his first live-action film since 2000's "Cast Away," Robert Zemeckis paces it brilliantly, slowly ramping up the energy from hungover lethargy to coke-fueled confidence, while creating undercurrents of dread as Washington hits his stride.