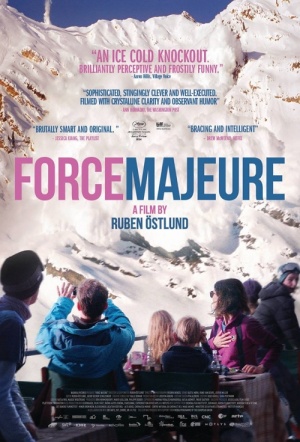 Darkly comic drama and Cannes Jury-winner. A father struggles with his conscience and reputation after leaving his wife and kids to fend for themselves during what he thinks is a life-threatening avalanche.

"The sun is shining and the slopes are spectacular but, during a lunch at a mountainside restaurant, an avalanche turns everything upside down. With diners fleeing in all directions, mother Ebba calls for her husband Tomas as she tries to protect their children. Tomas, meanwhile, is running for his life... The anticipated disaster failed to occur, and yet the family's world has been shaken to its core, a question mark hanging over their father in particular. Tomas and Ebba's marriage now hangs in the balance as Tomas struggles desperately to reclaim his role as family patriarch." (Cannes Film Festival)

This Cannes Jury-winner follows a father struggling with his conscience after leaving his wife and kids to fend for themselves during what he thinks is a life-threatening avalanche.

Ostlund’s unsettling psychological thriller leads with the spectacular incident and studies its disastrous consequences on each of the family members involved. Visually stunning...

Mightily clever in its rather theatrical structure, but bracingly cinematic in its formal approach, the movie has a bold, ambiguous final act.

Brushes off the surface layer of human behaviour revealing ice underneath.

Östland writes the conflict between husband and wife beautifully, like a scab that gets picked at until it bleeds, and he does things cinematically, too.

This premise is extraordinarily rich in dramatic power, and it is explored here with forensic thoroughness.

Should’ve ended a reel or so before it actually fades to black, this is another solid and provocative feature from Ostlund