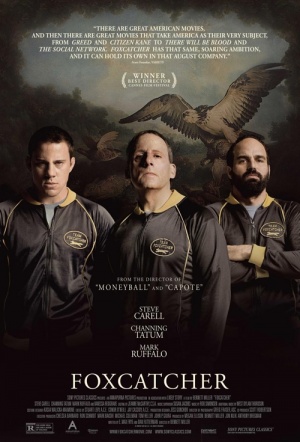 Schultz was critical of the film's depiction of the relationship between himself and du Pont, despite it being based on his own memoir and Schultz serving as a consultant during its production. Apparently largely upset about critics mentioning homosexual overtones, Schultz later apologised, tweeting "#Foxcatcher is a miracle. I'm sorry I said I hated it. I love it".

Nominated for five Academy Awards, including Best Director, Best Actor (Carell) and Best Supporting Actor (Ruffalo). Foxcatcher was oddly snubbed for a Best Picture nomination, making it the first film to be nominated for Director but not Picture since 2008's The Diving Bell and the Butterfly - back before the Best Picture category was expanded to include up to 10 films.

Director Bennett Miller mines it for all it's worth, and as the film grinds to its conclusion it's almost sickening. But it's difficult to tear your eyes away from a film this precisely rendered, a deeply strange true story as fascinating as it is disturbing.

Bruisingly intimate and psychologically nuanced, its spiral into savagery lingers like a bad dream.

The movie’s cynical thesis about the corrupting power of wealth is embedded in every frame... Arrestingly made yet oppressively morbid.

Beautifully acted and impeccably mounted, it is light on historical details and heavy on atmosphere, character and chintz.

A superb tragicomedy of the beta-male, a nightmare of the also-ran and almost-ran. It is also a deeply strange story about a strange man whose insecurities were all too ordinary and explicable.

Director Bennett Miller and screenwriters E. Max Frye and Dan Futterman have thought through every scene and every line in Foxcatcher. Nothing is irrelevant.

A superbly modulated study of a twisted mind with a career-changing performance by Steve Carell.

A sad and horrible story, expertly and compellingly told.