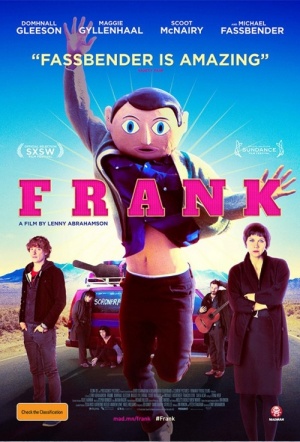 Michael Fassbender is titular enigma Frank - the leader of a pop band who wears a fake head made of papier-mâché - in this Irish comedy. Filled with aspirations, a young musician (Domhnall Gleeson, About Time) joins the band only to discover that he may have bitten off more than he can chew. Co-stars Maggie Gyllenhall as Frank's terrifying sidekick Clara. The film is inspired by Frank Sidebottom - the alter-ego creation of English comedian Chris Sievey.

"After a rocky start, Jon (Gleeson) ingratiates himself with the band members, and they retreat to a cabin in the woods to record an album. As his influence waxes, creative tensions mount, and the band’s entire raison d'être is called into question... The ensemble creates lasting images and sounds for a film that playfully examines the nature of art and artists." (Sundance Film Festival)

Fassbender's faceless performance offers a masterclass in body language, and that wide-eyed, open-mouthed mask invites band members, and viewers, to project their own readings.

If you'll pardon the cleverness, Frank takes time to wrap your own cranium around, faults and all, and that's a wonderful thing.

Works as satire, as memoir, as comedy bromance, but it works mostly because it is just so weird: an anti-Dumas fable about a man who never removes a fake head.

Whimsy and madness mix for an very unappetizing cocktail.

Dreams of rock stardom become a warped reality in this barking-mad but affecting comedy about the side-effects of being a non-conformist genius.