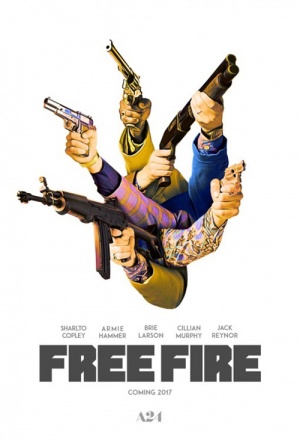 Massachusetts, late '70s. Justine (Oscar-winner Brie Larson) has brokered a meeting in a deserted warehouse between two Irishmen (Cillian Murphy, Michael Smiley) and a gang led by Vernon (Sharlto Copley) and Ord (Armie Hammer) who are selling them a stash of guns. But when shots are fired in the handover, a heart stopping game of survival ensues. Produced by our lord and saviour Martin Scorsese.

Crosses the irreverent cheekiness of Quentin Tarantino's "Reservoir Dogs" with the ruthless spirit of 1970s B-movies...

Ben Wheatley shouldn't settle for becoming the next Guy Ritchie. For some reason, he'd like to.

Far more than his previous films, which tend to unfold in a dream-like daze, Free Fire is a mad contraption, bristling with bravado and black, sardonic wit.

Mr. Wheatley's "High-Rise" was a highlight of 2016, and again he shows that he's a technically virtuosic director whose humour has a bracingly nasty side. He's also no dummy.

Part of the fun is the highwire act as the filmmakers try to outwit or outrun expectations...

"Free Fire" is not Wheatley's best film, but it is a rollicking good time and, more important, an inadvertent skeleton key to thinking about and understanding the rest of his films.

Alas, for all its stellar talent, Free Fire is a scattershot exercise in genre homage that ultimately misses the target.

This is seriously cool, stuffed with great dialogue and riddled with bullets.