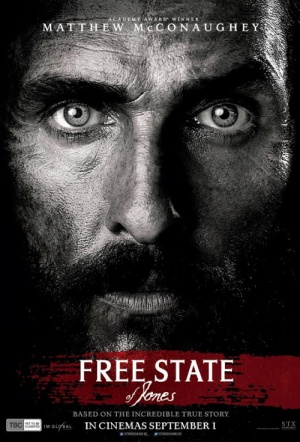 Matthew McConaughey is a defiant Southern farmer who inspires and leads a rebellion against the Confederacy during the America Civil War, in this true-story drama from Gary Ross (Pleasantville, Seabiscuit).

After surviving the 1862 Battle of Corinth, Newton Knight gathered a group of small farmers and local slaves in an armed rebellion in Jones County. Knight would go on to marry a former slave and establish a mixed-race community - unique to the post-war South.

"Free State of Jones" is one of those historical dramas with a script that's big on crowning lines of moral fervour and not so big on nuts-and-bolts detail.

A riveting visual history lesson, whose occasional didacticism is integral to its power.

The Free State of Jones is an anti-war film with a commie message that still glamourises southern pride, hard work and the Good Book. It's a nuanced message far too rare in our current political state.

You really feel like this is a location where life is nasty, brutish, short and breathless.

If you think a thick, juicy slab of Civil War history can't be boiled down to 145 minutes of speechifying, stultifying cinema, then grab a seat. Even McConaughey is sucked dry of his usual acting panache.

If McConaughey's performance is a little too jut-jawed and noble, the script has plenty of force.

A compelling and little-known story of the Civil War period is studiously reduced to a dry and cautious history lesson.