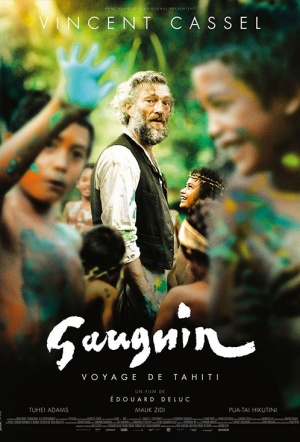 "Suffering under the weight of what he feels are the constricting mores and stultifying political climate of bourgeois Paris, Gauguin moves to the island of Tahiti, intent on re-discovering his artistic motivation. While immersed in the South Pacific, he experiences solitude, poverty and sickness but also – thanks to a young and captivatingly beautiful ingénue, Téhura (played by newcomer Tuheï Adams) – unrestrained passion and love, which adds fuel to his creative fire." (Alliance Française)

Vincent Cassel lays on the tortured-artist schtick extra-thick in this ultimately tedious French-language portrait of the artist Paul Gauguin.

The love triangle as depicted here isn't a strong enough structure to support either a traditional three-act configuration or a looser association of ideas connected to Gauguin and his life.

The script must have had a lot of empty white space. This is a truly boring movie, in which barely anything happens.